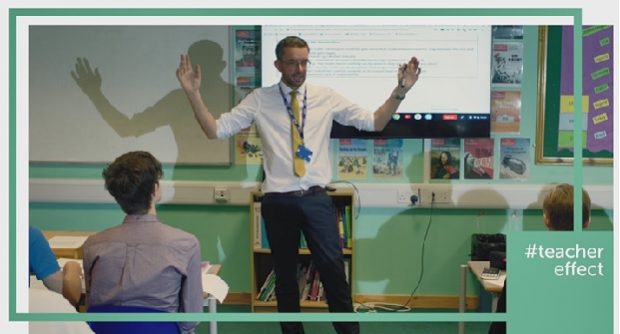 Jamie Benson teaches A Level economics at Greensward Academy in Essex. As head of Sixth Form, he also counsels students after they receive their GCSE results. Find out what happened when one student didn’t get the grades he was expecting.

Every student has potential. It might not be obvious every minute of every day; sometimes you might have to look harder in some students than others. But every student has a potential – and that’s what the school’s job is – to kind of unlock that potential that they have.

I remember one boy from a few years ago, he didn’t quite get the GCSEs that he was expecting, or that he really needed. And you could see there was something about him; he had that sort of Essex gift of the gab. So I sat him down in my office and I said:

“Look, we can offer you this course, the other course… or why not Economics?” and you could see he looked a little bit puzzled, he didn’t know exactly what it was about, but he said:

“Yeah, OK, fair enough. If that’s what will get me a place at the sixth form, then I’ll pitch up to your economics class.”

He settled into it really, really well – really enjoyed it. He did phenomenally well, I think he got an ‘A’ at the end of two years of study, went on to university to study an economics degree, and he’s currently working up in London as an economist in a top City firm. So, for him, it really worked out well.

And there are occasions when you can stop, take a step back and think: yeah, that’s the difference I made. Previously, he didn’t know what economics was, but you guided him, you encouraged him and you gave him his confidence back – which was a little bit low after his GCSE results – and actually now, he’s absolutely flying.

The reward comes from hearing back from the students and finding out exactly where life has taken them after they’ve left us.

Want to receive blog posts in your inbox?