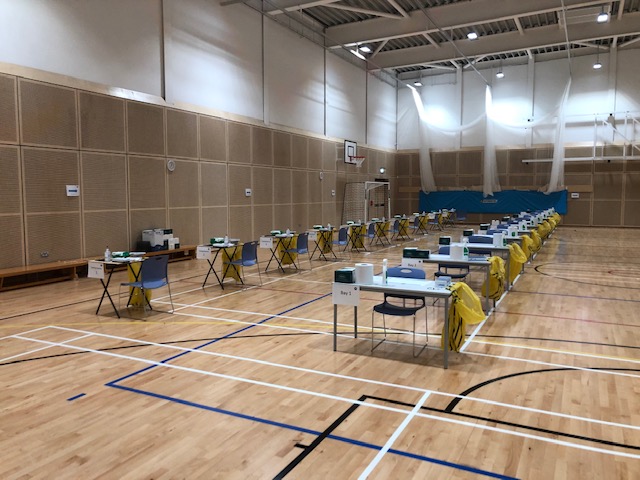 Luke Magee is Principal of Wye School, Ashford, Kent. Wye School, part of United Learning, has been part of the COVID-19 testing pilot during November and December 2020. Luke shares his experiences of running testing in a secondary school.

Three years ago, when I first became a Head of Wye School, a relatively new village school, I thought about the possible challenges and events I would face. I correctly predicted Wye School's first GCSE and later A Level exams, recruiting staff, recruiting students, managing a budget, moving into new school buildings and an Ofsted inspection.

I did not imagine, however, planning for a global pandemic and its impact on all of us running schools. Since September 2020 and the end of lockdown for schools, our overall attendance has remained relatively high. But like other schools, we have been impacted by staff and student absence related to COVID-19.

When the Department of Health and Social Care offered us, as part of United Learning, the chance to take part in a testing pilot, we accepted as we wanted to see if that would help us minimise staff and student absence and help protect them from the spread of the virus.

I know that as a headteacher, if I hadn’t been part of the pilot, I would have many questions for those schools that had taken part. So, I’ve set out below what I think I’d want to know:

1. How has your school been affected by the COVID-19 outbreak and what was the impact on learning and capacity?

We have had a slow but steady series of Coronavirus cases that have impacted on our school, and this has picked up as the wider Kent figures rose and we entered Tier 3. This meant that each week different students from different year groups would be isolating at home, and some staff. At its worst, this represented as much as 40% of our school intake, but in most weeks was around 12%.

We found that staff absence has not been impacted much directly by the virus but has increasingly been impacted by the need for childcare as their children were asked to isolate. We have done everything we could to reduce the impact of absence on learning including teaching students who needed to self-isolate via Teams, providing laptops and wireless devices for students without them, and teachers isolating at home teaching their classes in school via Teams.

2. Why you were keen to take part in the pilot, and how did it work for you?

When offered the pilot, I thought that the ability to test students and staff who had been in contact with the virus would enable us to keep them in school and so reduce the impact of virus-related absence. This quickly proved to be the case with the majority of students and staff choosing to remain in school and be tested daily rather than self-isolate when they were identified as COVID-19 contacts.

3. What was the impact of testing staff? Has it been straight forward in terms of admin and operation?

There are logistical, admin and planning tasks that school staff needed to carry out which did take up some staff time. But they were straight forward and well explained in booklets and Powerpoints provided by Public Health England. The Lateral Flow Tests themselves are straight forward to use and the results are easy to identify. And any time spent on this needs to be considered against the time lost when staff or students need to self-isolate.

4. What was the impact on parental confidence?

Parental, staff and student confidence was significantly improved by the testing pilot. It allowed us to demonstrate that we had a low incidence of the virus in school as so few students and staff tested positive. This calmed the nerves of some parents, staff and students who had been assuming that the rate at school was likely to be higher as it was rising in the local community.

5. How has your participation in the pilot supported your track and trace efforts?

We have had to do the same track and trace work as other schools but the difference has been that each time contacts were identified, they had the choice of staying in school rather than self-isolating, as long as they agreed to daily testing. All staff and a large majority of students given this choice opted to stay in school and so our participation in the pilot undoubtedly reduced both staff and student absence.

Overall, we found the experience of working with staff from Public Health England to be very smooth. When the work of the pilot is rolled out more widely after Christmas I would recommend that other schools strongly consider taking part.

More information on testing in schools and colleges

Read the guidance for schools and colleges about how they will start to test pupils and students from January.